Casting the Barrier between Magick and Magic

Witches and wizards everywhere are probably busy concocting their potions. Some might be focused on weaving spells and, for the particularly vindictive ones, maybe hexes. Regardless of preferences and whether it’s Halloween or not, magic is everywhere. Or is it magick? It might help to know the difference—we wouldn’t want to cast the wrong incantation. 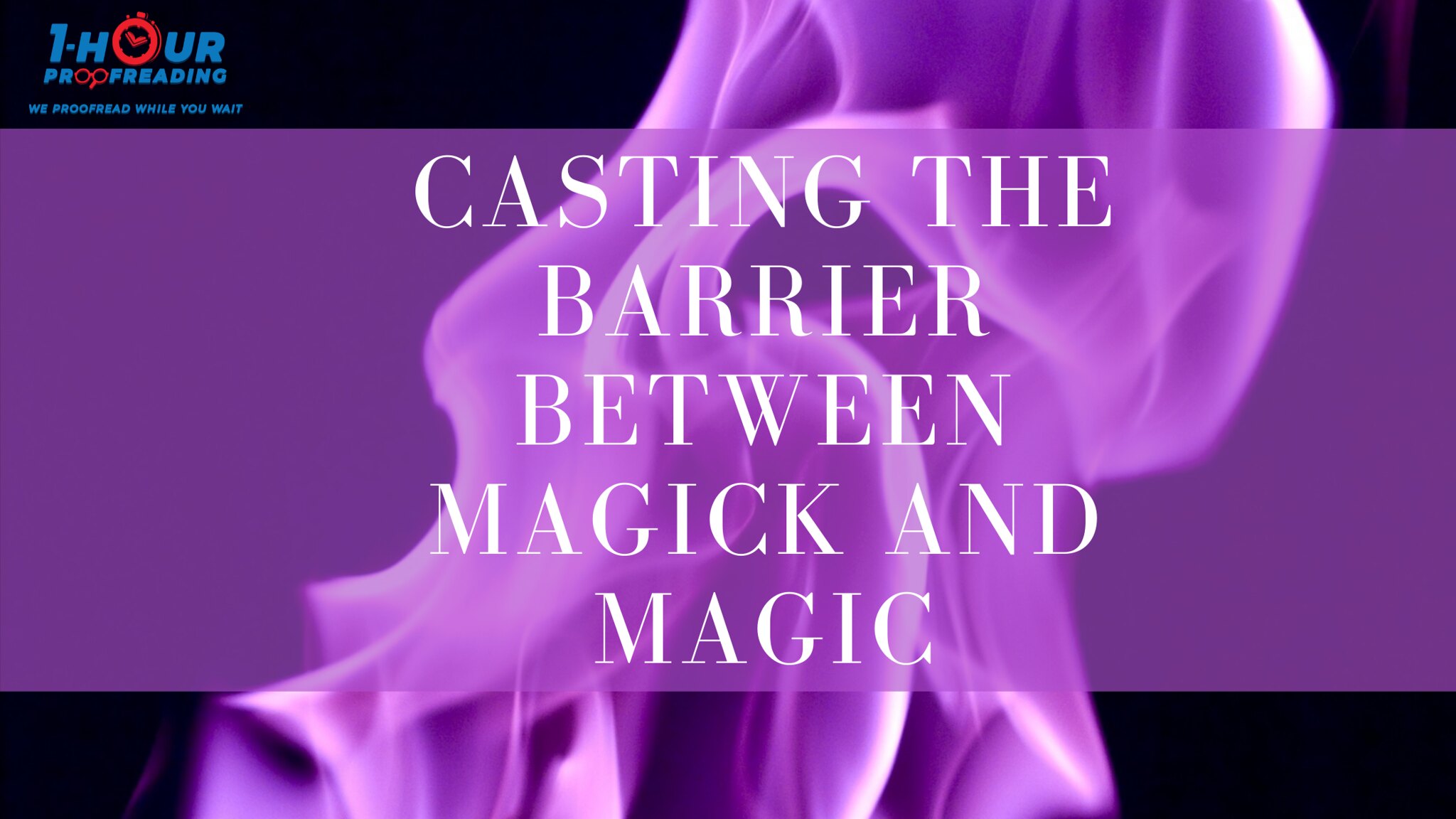 We’ll start with magic. It can be a great many things. It can be the craft of illusions and sleights of hand, as in show magic. Think of the bloke who pulls bunnies out of hats. It’s the trick in Trick or Treat. It can also be an “extraordinary power or influence” that comes from a “supernatural source”, like writers who seemingly weave magic with their words, or something that can enchant someone, like books that hold readers in their thrall. Then it can also be the more spiritual kind, like rituals and incantations, the kind of magic that is believed to control the forces of nature.

Magick, depending on how one wants to understand it, can be considered part of magic or be something else entirely. Magick is not just a linguistic flourish that one employs to make their magic more special—or edgier, as modern folks might say. Literary works and video games have their fair share of using magick instead of magic, often referring to it as something that controls the elements or deals with realms beyond the physical. That is indeed where the difference lies: magick is used to refer to the spiritual aspect of magic. The latter may be used to refer to the former, but the former cannot be used to mean everything that the latter does.

The term magick was first used for this distinction by Aleister Crowley, the founder of the religion of Thelema. Before this formality, magic and magick were used interchangeably because words were much messier in terms of usage back then, and some people were paid by the amount of letters in their work so that extra k was a bonus just waiting to be grabbed. But now, the added letter has gained a much more nuanced significance.

On the surface, it was meant to separate it definitively from show magic. This paved the way for people to treat magick more seriously, something that is more than entertainment, something that people would want to turn to for their spiritual needs and bring them closer to their destiny, as Crowley posits. The added k also has a more mythological importance: this makes the letter count for the word a total of six, as in the six sides of the hexagram, which are valuable symbols for Crowley. One might say that such symbols are significant to magick in general since they are found in many religions.

Let’s put them in sentences to make distinguishing easier:

Another quick way to remember the two is using the six letters of magick as a trademark for its mystical qualities and the hexagram. If that’s not enough, take the five letters of magic and compare it with the number of fingers found on the typical human hand. Hands are used for show magic, and a hand has five digits.

Establishing this difference does not mean that the two crafts cannot work together. Magic may enhance magick by providing a physical manifestation of the spiritual wonders of the world. Likewise, magick may empower the performer of magic through the strengthening of belief. Perhaps the crucial thing to be picked up from distinguishing these words is the respect that either one deserves. Both have proper names to refer to them, and both are real.

This article has been sufficiently wondrous. We hope this digital scroll of knowledge helps readers find their inner magick. Questions will undoubtedly arise in this journey inward, and if there are any concerning language and writing, just send them our way and we’d be more than happy to work our magic.

About 1-Hour Proofreading
1-Hour Proofreading is a growing start-up offering fast and efficient editorial services. Our team of highly competent and professional copy editors is committed to helping those in need of quality proofreading and copyediting services while facing tight deadlines. We ensure that your document is ready for publishing the soonest you need it. 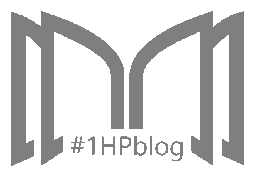 Seller
Writing & Translation
Check out my Gigs
your1houreditor
Fiverr
Seller
We are a team of professional editors dedicated to bring out your document’s full potential. We have years of substantial experience in editing a wide range of documents, from academic papers, fiction and nonfiction manuscripts, to blogs and web content. We are excited to work with you soon!

A Puzzling Lot: Distinguishing “A Lot” from “Allot”

Words can be confusing a lot of times. Or wait, is it “a lot” or “alot”? And wasn’t there another word, “allot”? Before it gets any more chaotic, let’s sort their definitions out. 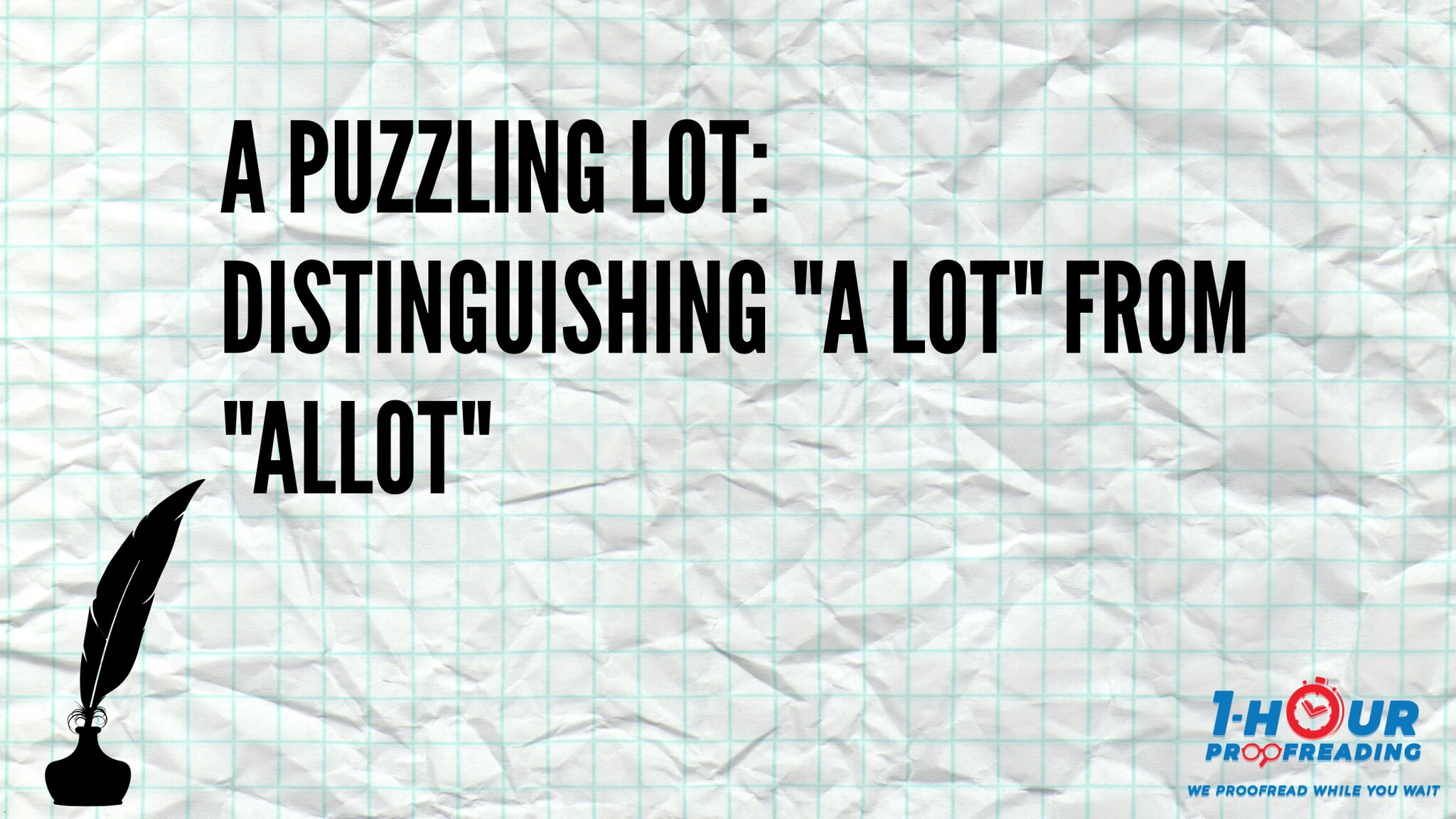 For starters, “alot” is just a common misspelling of the phrase “a lot.” With that out of the way, we focus now on settling the differences between “a lot” and “allot.” 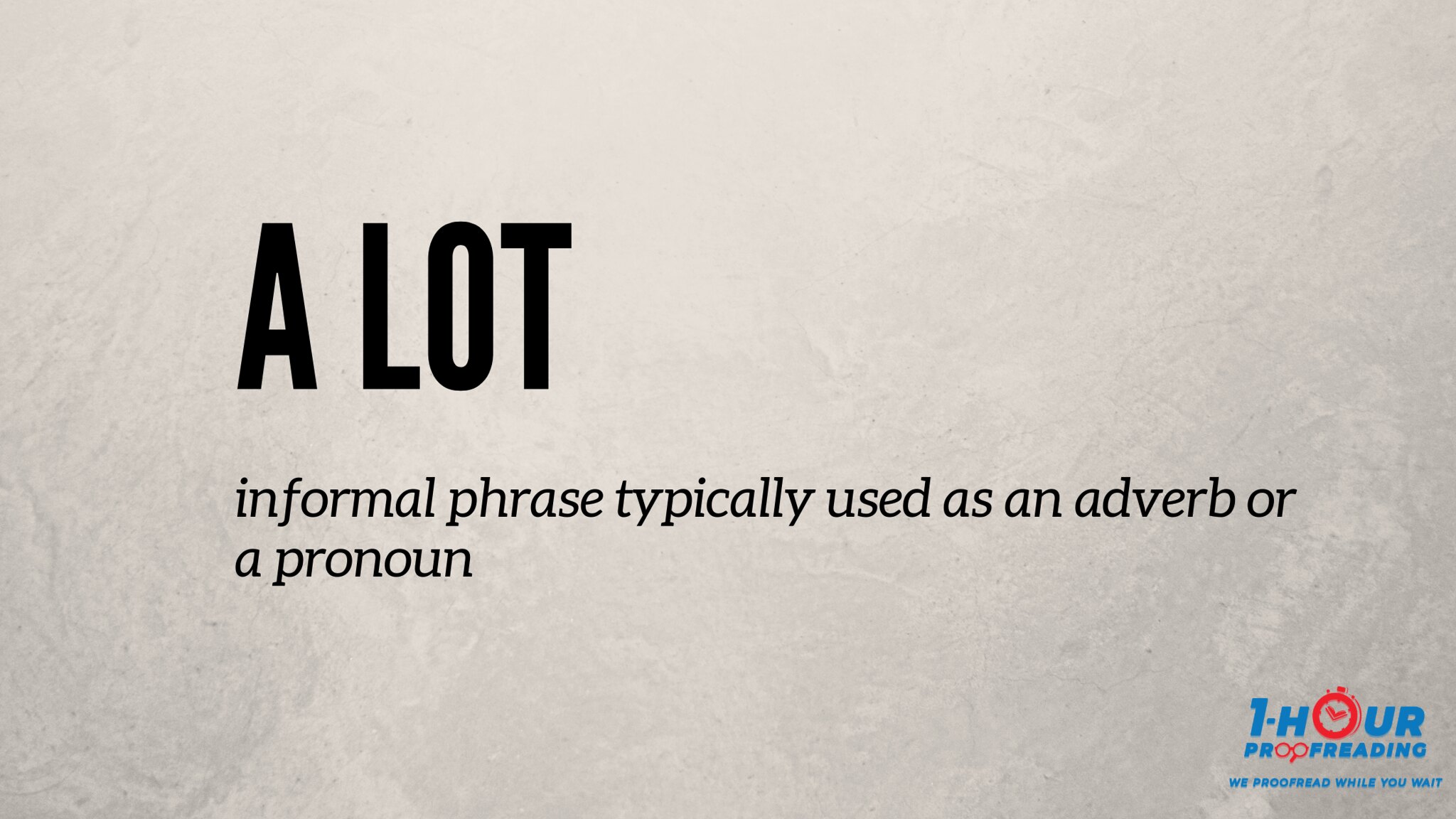 “A lot” is an informal phrase typically used as an adverb or a pronoun. It comes from the word “lot,” as in “an unpleasant lot,” with meanings ranging from an ugly patch of land to a bunch of people you may not want to deal with. “Lot” in the phrase sums up these definitions and refers to “a considerable quantity or extent.” Therefore, “a lot” is “a large number or amount” of a particular thing, be they persons, items, or even abstract concepts such as love and time. We need not look further—one can say that the word “lot” has a lot of meanings. It can also be used to describe frequency, as in we tend to write about grammar a lot. 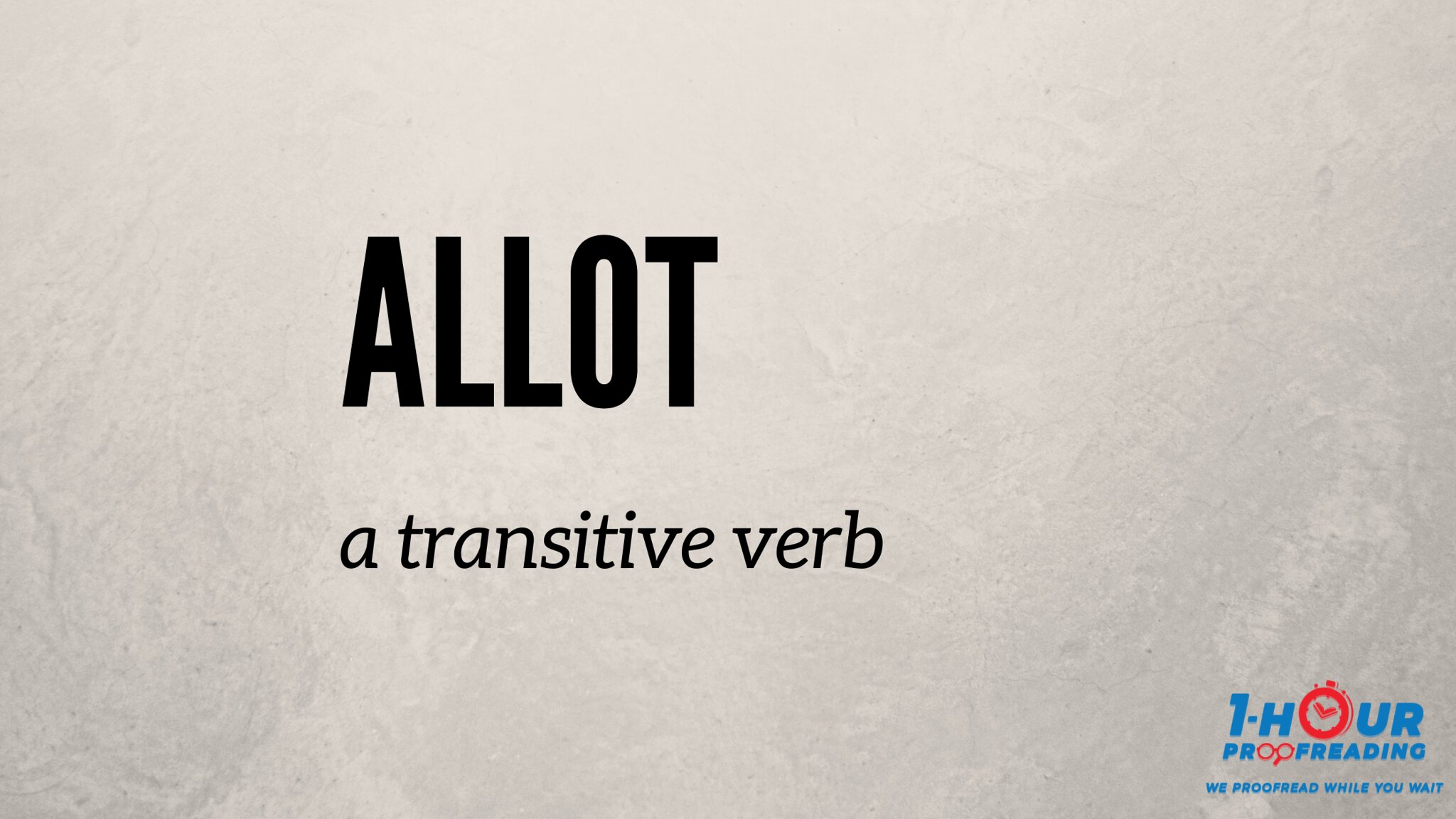 “Allot,” on the other hand, is a transitive verb. It shares the root word “lot,” which is why it is similarly involved with portions and amounts. The key difference is that “allot” refers to the act of “assigning as a share or portion” and “distributing by or as if by lot.” For example, you, the reader, are allotting time to know the differences between “a lot” and “allot.”

Here are a few more side-by-side examples for review:

Another easy way to distinguish them is that there are more words in “a lot” than in “allot”, which has only a single portion.

That’s a lot of lots. This has been sufficiently bamboozling, but we hope this article helped out a lot. Just to be sure, you might want to allot a little more time to practice using these words. But if you have some more questions about grammar, language, and writing, just send us a message, and we’ll get to it as soon as we can. Until then, feel free to look through the other entries on the blog.

About 1-Hour Proofreading
1-Hour Proofreading is a growing start-up offering fast and efficient editorial services. Our team of highly competent and professional copy editors is committed to helping those in need of quality proofreading and copyediting services while facing tight deadlines. We ensure that your document is ready for publishing the soonest you need it.